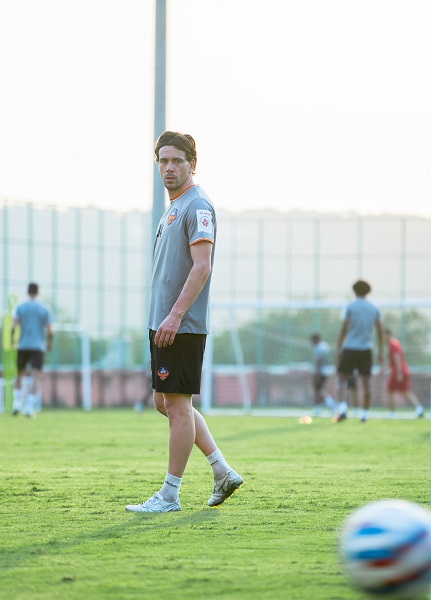 ~ The Spaniard is now the joint-leading scorer for the Gaurs  ~

Goa Khabar: No one embodies the fighting spirit for FC Goa more than Iker Guarrotxena. And on Thursday night, he seemed to have put his all-purpose boots on as the Spaniard scored twice to lift the Gaurs to a point after a disjointed performance had seen them fall behind twice.

The feat was even more commendable for the fact that it was the Spaniard’s unfortunate touch that led to an own goal in the early minutes.

“We never thought that the game was beyond us. We were creating a lot of chances immediately after conceding a second goal. It says a lot about this team. Even after equalising we were looking for the winner in the final minutes,” the Spaniard stated following the draw against Jamshedpur.

“It shows courage, it shows hunger, and a lot of power during 90 minutes plus extra time. We will improve things week by week, but the character we have shown is in our DNA and it’s something we can not lose.”

The Spaniard  is the only player in the ISL to have won  7 or more duels in more than six games (including the last game vs Jamshedpur) in the ongoing season. He also leads the league in duels won (63).

After a delightful start to the season, Carlos Pena and his men saw themselves being dragged back to earth thanks to three defeats in the space of four games starting in the middle of November.

However, a show of real grit at the beginning of the season saw them halt the slide and eke out important wins against Odisha and NorthEast before the duel in Jamshedpur.

And after eventuating a comeback to be proud of, head coach Carlos Pena also sounded out praise for his Spanish forward as well as the team for showing character in what was a tough game.

“I am extremely happy for Iker. He contributes not only with his goals, but also with a lot of hardwork off the ball and gives our team a real teeth in the middle of the pitch. He puts a lot of soul to his game and that showed today,” remarked the FC Goa head coach.

“We are not happy (with the result) because we wanted to get three points here, but the team showed character. We had to come back two times. It was a very big test for us.

“Jamshedpur were more aggressive today than before, pressing us in the first half. That broke our continuity. We knew if that happened, we will have problems.

“In the second half, we completely turned it around. Even the goal that we conceded was our fault. We tried to attack. We tried to create chances. We had the chances, ut had to wait till the 89th minute for our second goal.”