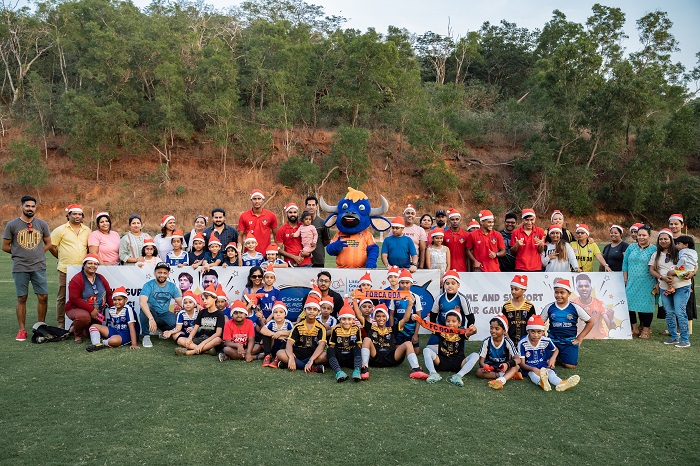 Goa Khabar: FC Goa hosted a special junior Christmas Party at the Monte de Guirim ground, the venue for the North Zone of the Little Gaurs League on Thursday.

Participants of the Little Gaurs League and their families were invited to the event to enjoy a memorable evening.

Five members of the FC Goa First Team, namely, Saviour Gama, Princeton Rebello, Muhammed Nemil, Hrithik Tiwari and Lalremruata HP also attend the event as special guests. Together with the LGL participants and families, they celebrated Christmas and the sport that brought them together, through various fun activities and interactive sessions.

To mark the start of the event, the five players took on 50 children in a unique game of football. This was followed by them speaking to the participants of the LGL, as they narrated their experiences and offered words of advice to budding footballers who are keen to make the sport their career.

Afterwards, the FC Goa star posed for pictures with the children and their families, to cap off a memorable day for the Little Gaurs.

The youngsters were also given the opportunity to meet the official Club mascot, Philly the Gaur who acted as Santa for the day as he came bearing gifts. A body-painting counter was also available to add to the fun for those present.

In other news, the FC Goa U17 side kick-started their Hero U17 Youth Cup campaign on Saturday, at the Benaulim Football Ground where they came back from behind to hold ARA FC to a 3-3 draw.

The Young Gaurs broke the deadlock in the 14th minute through Saideep Tate, but Krishna S brought the scoresheet back to level terms with his strike for ARA FC in the 26th minute.

Following the change of ends, FC Goa took the lead once again in the 66th minute, when Likson Rebelo found the back of the net. ARA FC, however, fought back hard and scored in the 68th and 72nd minute to turn the tides in their favour.

In the 82nd minute, the Boys in Orange were awarded a penalty which was converted successfully by Prachit Gaonkar to restore parity on the scoreboard. Their next assignment is against Bengaluru FC at the Benaulim Football Ground on December 26.