Goa Khabar : Government reiterated its commitment for proper management of waste in the State and instructed the concerned authorities to enforce Acts and laws if required stated by the Chief Minister Dr. Pramod Sawant.

Dr. Sawant reviewed and assessed the ongoing works which are in progress in both the districts of the State at a meeting of the Board of Directors of Goa Waste Management Corporation at Secretariat, today.

The Chief Minister also directed the concerned officials to compete the ongoing Solid Waste Treatment projects at places like Cacora and Common Hazardous Waste Treatment Storage Disposal Facility which is coming up in Pissurlem in Sattari Taluka.

Minister for Science and Environment, Shri Michael Lobo said that the Government is serious about proper management of waste and presently concentrating on completion of Integrated Solid Waste Management facility at Cacora in Quepem taluka. Other such projects which are in progress at places like Kundaim, Bicholim would be soon made functional, he informed. 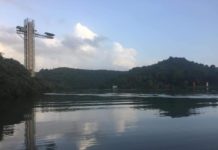 Ivan Ayr’s debut feature Soni to make its World Premiere at the prestigious...