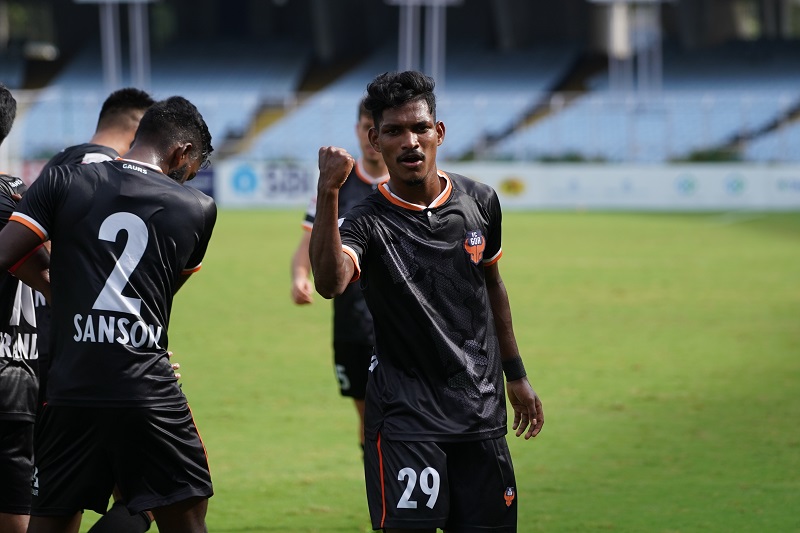 Devendra Murgaokar and Md. Nemil score a brace each to help Gaurs breeze past the opponents  ~

Goa Khabar: FC Goa finished the group stages of the Durand Cup with a convincing 5-0 win over Jamshedpur FC side that was largely made up of players from their youth system. A brace each from Devendra Murgaokar and Muhammed Nemil accompanied by Princeton Rebello’s first goal for the FC Goa senior team helped the Gaurs secure their third win in as many games.

The game saw Hrithik Tiwari make his debut for the FC Goa senior team as he started in goal for Juan Ferrando’s men. The keeper has now played for three different FC Goa teams (U18, Developmental and now senior) in as many seasons.

FC Goa off to a brisk start

FC Goa started the game strongly and took the lead in the 16th minute as Devendra Murgaokar met Brandon Fernandes’ corner at the near post before flicking it into the goal for his second of the tournament.

The Gaurs kept the pedal to the metal and continued to put the pressure on their opponents and soon reaped the rewards for their persistence as Princeton Rebello scored seven minutes later from close range to double the Gaurs’ lead.

If there was any doubt about the result still, Devendra put that question to bed at the fag end of the first half. A brilliant through ball from Princeton helped Brandon get behind the backline. And while the keeper did well to parry Brandon’s effort on goal, Devendra was swift to follow up and slot in the rebound to make it 3-0.

Nemil runs the show in the second half

Goa was in no mood to stroll past the remaining minutes and made it 4-0 within the first 2 minutes of the restart. Some brilliant work by Alberto Noguera saw him dribble past a couple before putting in a ball for Muhammad Nemil. The teenager turned his man before applying the finishing touch on the stretch.

The moment of the match was reserved for Muhammad Nemil once again as he scored a stunner for the second game in a row. After a long-ranger in the last game, the teenager decided to do it with more guile this time around as he chipped the keeper from an angle from about 20 odd yards to leave all jaws open at the ground.

The win sees FC Goa finish top of Group B with a 100% record from their 3 games. Army Green beat Sudeva Delhi FC 1-0 in the group’s other game to finish in second position in the group.

FC Goa will now face the 2nd placed team in Group C on September 23 at the Mohun Bagan ground. That game is scheduled for a 3 pm kickoff.