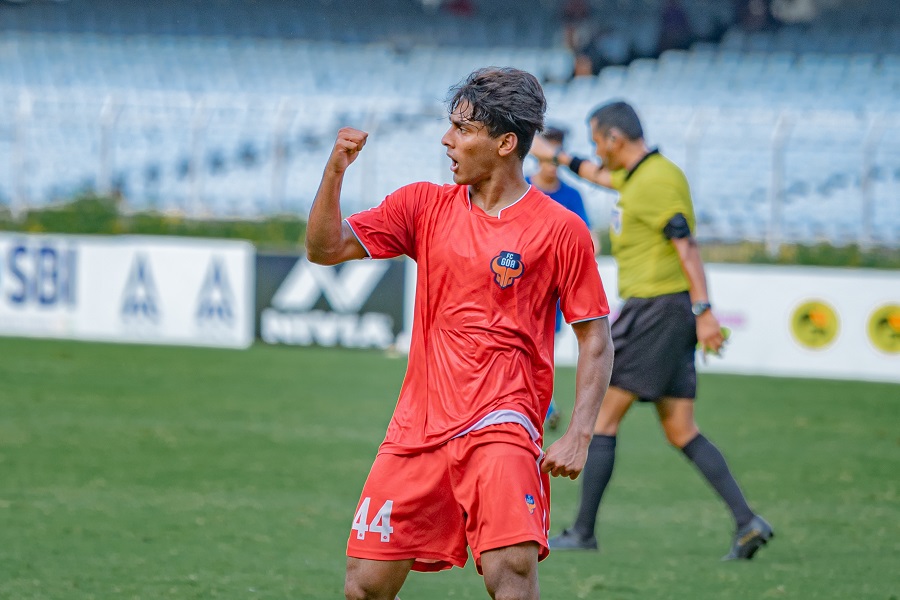 Md Nemil scores on his first start for FC Goa

Goa Khabar: FC Goa booked their place in the quarter-finals of the 2021 Durand Cup with a 2-1 win over Sudeva Delhi FC today at the Vivekananda Yuba Bharati Krinrangan in Kolkata. The win though was marred by a reckless tackle on Jorge Ortiz cut his first action of the season short.

The Gaurs made a more composed start to the game when compared to the tournament opener, but failed to really impose themselves when it came to the final third of the pitch in the early going.

Whilst the Gaurs enjoyed the bulk of the possession and were in control of proceedings, neither of the goalkeepers was called into action for the majority of the first half. That, though, changed in the 45th minute when Nemil burst into action.

Given his first start in FC Goa colours, the teenager burst forward through the middle before executing a turn and pull up back perfectly to make room for a shot. Whilst that in itself was enough to pull all-comers to the edge of their seat, the finish was one to draw them off it as he curled in a powerful shot from about 20 yards out to give FC Goa the lead.

Sudeva came to life in the early minutes of the second half and in fact, had the Gaurs worried when a low curling effort from Maichael Singh hit the upright in the 51st minute.

Goa got things under control again swiftly after the opening few minutes and nearly found the net in the 62nd minute with Nemil at the heart of the movement again. A deft no-look pass from the youngster set Alberto Noguera for a shot from close range. The Spaniard’s shot on his weaker right foot was well-placed but didn’t pack the required punch to beat the keeper.

Ortiz scores but goes off injured

The Gaurs finally put the game to bed in the 80th minute when Ortiz, who had come on to the pitch only a few minutes earlier delivered a thumping finish – again from a distance that hit the crossbar before going in.

The joy of the goal though wasn’t apparent at all as Akbar Singh’s tackle on Ortiz in his attempt to block the shot brought an abrupt end to his game.

Sudeva got themselves a consolation goal from the penalty spot in the 7th minute of added-on time after the referee deemed Edu Bedia to have committed a foul in the box.

FC Goa will play their final game of the group stage on Friday, September 17 when they take on Jamshedpur FC. That game is scheduled for a 3 pm kickoff.