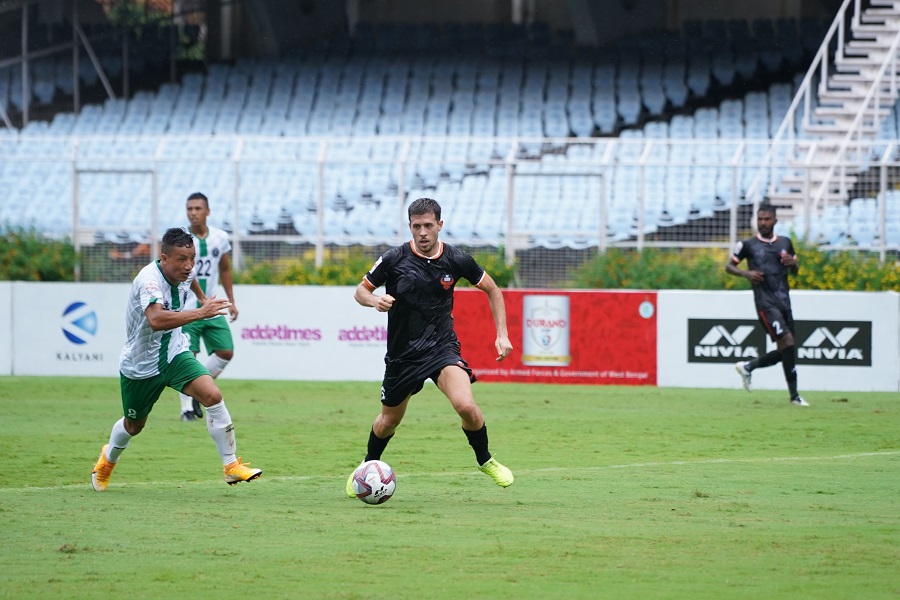 ~ Alberto Noguera and Devendra Murgaokar on target for the Gaurs ~

Goa Khabar: FC Goa began their Durand Cup campaign with a convincing 2-0 win over Army Green today in Kolkata. After a disjointed start to the game, Juan Ferrando’s men slowly got into their rhythm, scoring goals on either side of the break to secure all three points from their opener.

Juan Ferrando named a young starting line-up with Papuia and Christy Davis making their senior team debuts for the Gaurs. Princeton Rebello was named captain, whilst the starting XI featured only one foreigner in Alberto Noguera.

Both sides started on a cagey note with a general sharpness lacking in the final third. However, as the game wore on, the Gaurs started to make their presence felt and finally broke the deadlock in the 35th minute.

Some neat interplay between Makan Chothe and Noguera helped the Spaniard break beyond the last line of defence before dinking the ball over the onrushing Sarath Narayanan in the Army Green.

The Gaurs got mighty close to a second five minutes later when they broke on the counter but Murgaokar’s lung-busting attempt was thwarted by the keeper.

Ferrando rang in the changes at halftime with Glan Martins, Alexander Romario Jesuraj and Md Nemil coming on for the Gaurs.

It was Army Green, however, who sprang out of the boxes the quickest following the break as Naveen Kumar had to effect two good stops within the first three minutes of the second half to keep the 2016 Durand champions at bay.

FC Goa came back to life after the initial jitters and finally made their superiority count in the 59th-minute mark. Good work down the right saw Romario with space and time to place the ball on a plate for the onrushing Murgaokar who slotted the ball beyond the keeper to give the Gaurs a 2 goal cushion.

Goa created a number of chances in the remaining minutes but failed to make further inroads as the game finished 2-0.

FC Goa will be back in action next Monday (September 13) when they take on Sudeva Delhi FC. That game is scheduled for a 3 pm kickoff.

Acche din are proving to be very bad for the people: Srinivas BV